The FSB has designated over-the-counter (OTC) derivatives as one of the priority areas for implementation monitoring. Regular monitoring and detailed reporting in this area is carried out by the FSB OTC Derivatives Working Group (ODWG).

Overall, good progress has been made to date across the G20’s OTC derivatives reform agenda, though progress since 2018 has been limited (Graph 3).

The availability and use of trade repositories (TRs) and CCPs remains stable. 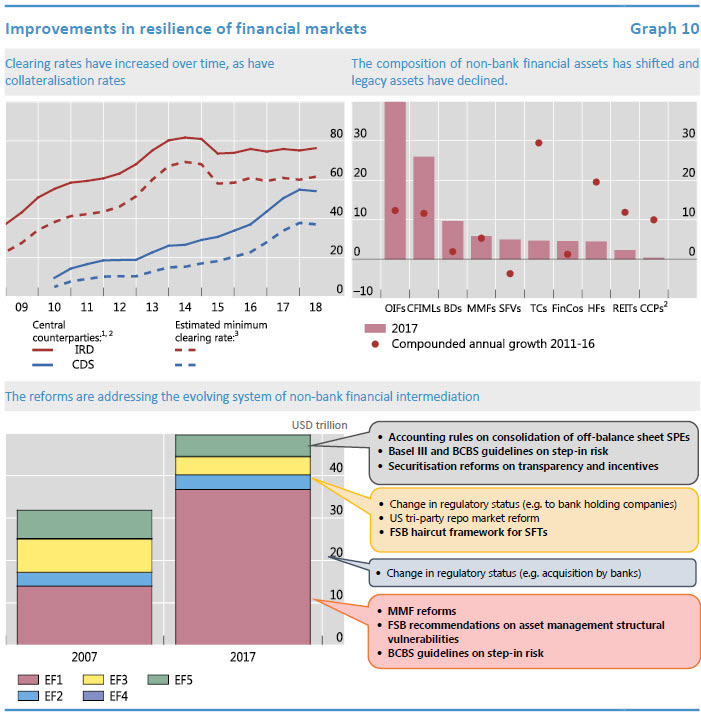 Work is ongoing at the international level to make trade reporting truly effective.

2 The BCBS and IOSCO extended in July 2019 the final implementation phase of margin requirements by one year to support smooth and orderly implementation across jurisdictions.↩

3 The EU is counted as one FSB member jurisdiction for this purpose.↩

5 The joint Committee on Payments and Market Infrastructures (CPMI)-IOSCO working group on harmonisation of key OTC derivatives elements issued technical guidance on the Unique Transaction Identifier (UTI) in February 2017 and on the Unique Product Identifier (UPI) in September 2017, and on critical data elements (CDE) other than the UTI and UPI in April 2018. The FSB has recommended implementation of the UTI in all FSB jurisdictions by end-2020 and of the UPI by 2022Q3. CPMI-IOSCO has also recommended implementation of the CDE by 2022Q3. Governance arrangements for the maintenance, oversight and global implementation of these OTC derivatives data elements have been agreed.↩