Monitoring of Other Areas

The monitoring of implementation in other (non-priority) areas of FSB/G20 reform is undertaken by the FSB’s Implementation Monitoring Network (IMN). The principal source of information for the IMN is the responses to its annual survey by FSB jurisdictions. The FSB has not undertaken an evaluation of survey responses to verify the status or assess the effectiveness of implementation. In a number of cases, the complexity of the reforms and the summarised nature of the responses does not allow for straightforward comparisons across jurisdictions or reform areas. In particular, reforms whose implementation status in a particular area is reported as complete should not be interpreted to mean that no further steps (e.g. to reflect new international policy developments or follow-up supervisory work) are needed or are underway in that area.

The areas of reform included in the current version of the survey are:

Responses submitted by FSB jurisdictions to the annual IMN survey can be viewed here: National/regional responses to IMN surveys.

Overview of the Reported Implementation Status

An overview of the reported implementation status by recommendation and jurisdiction from 2019 IMN survey is shown below (and can be downloaded as PDF): 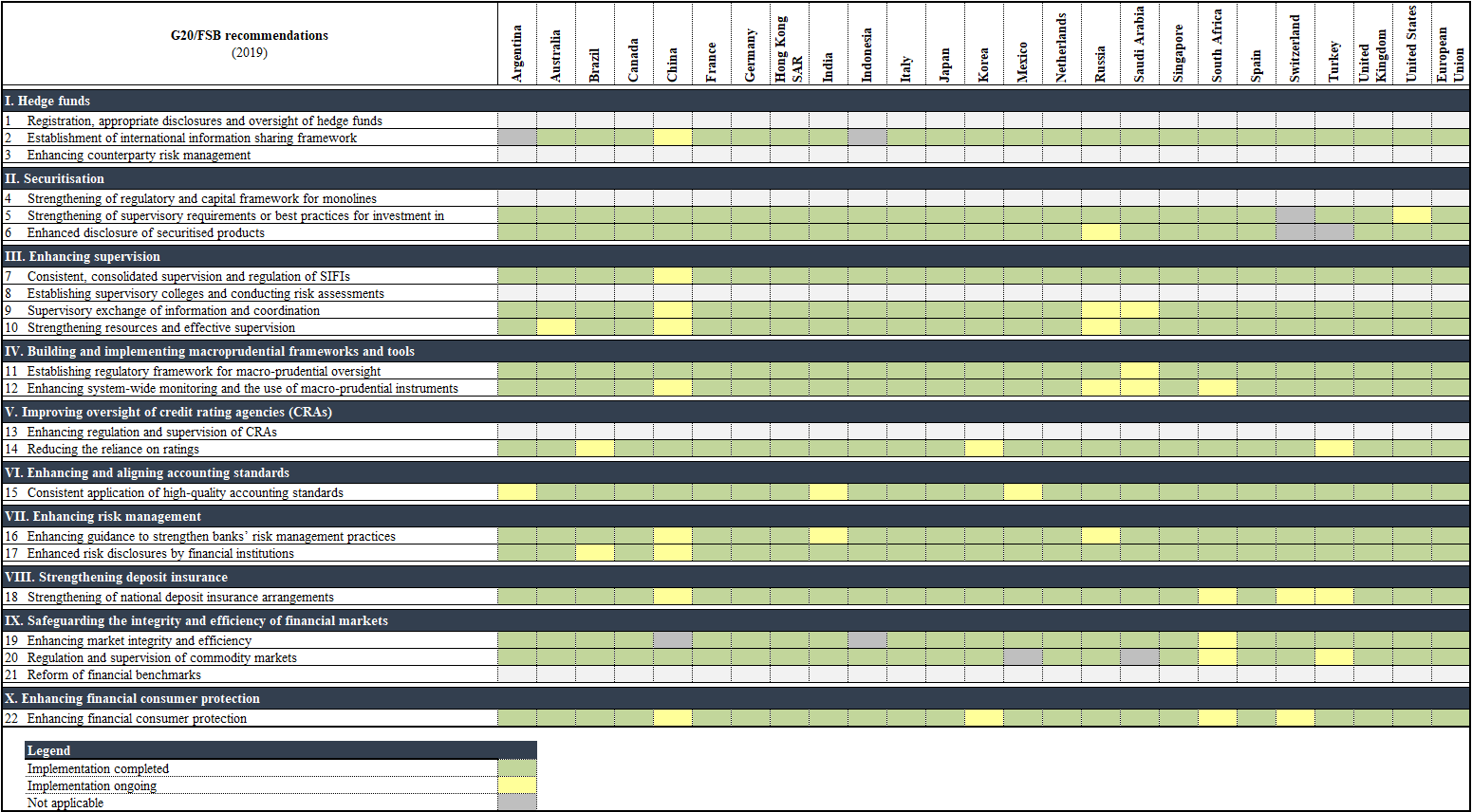 Additional information, based on the survey responses can be found below.

To enhance the comprehensiveness, consistency and granularity of responses, the 2015 IMN Survey included a few additional questions for four recommendations that were reported to be at an advanced stage of implementation. Tables summarising jurisdictions’ responses in each of these reform areas can be accessed by clicking on the following links:

The query tool below enables users to obtain information on the status of national/regional implementation of G20/FSB recommendations covered by the IMN survey based on three filters: area of reform, jurisdiction and year. This information is based on self-reporting by FSB jurisdictions.

In 2019, jurisdictions that previously reported implementation of a recommendation as completed were not required to update information about progress to date or next steps for that recommendation. Given the advanced implementation status of the reforms, most 2019 survey responses are therefore unchanged from those of 2018.