The Global Shadow Banking Monitoring Report 2017 presents the results of the FSB’s annual monitoring exercise to assess global trends and risks from the shadow banking system. The 2017 monitoring exercise covers data up to end-2016 from 29 jurisdictions, including Luxembourg for the first time, which together represent over 80% of global GDP. This Report also includes, for the first time, an assessment of China’s non-bank financial entities’ involvement in credit intermediation that may pose financial stability risks from shadow banking, such as maturity/liquidity mismatches and leverage. 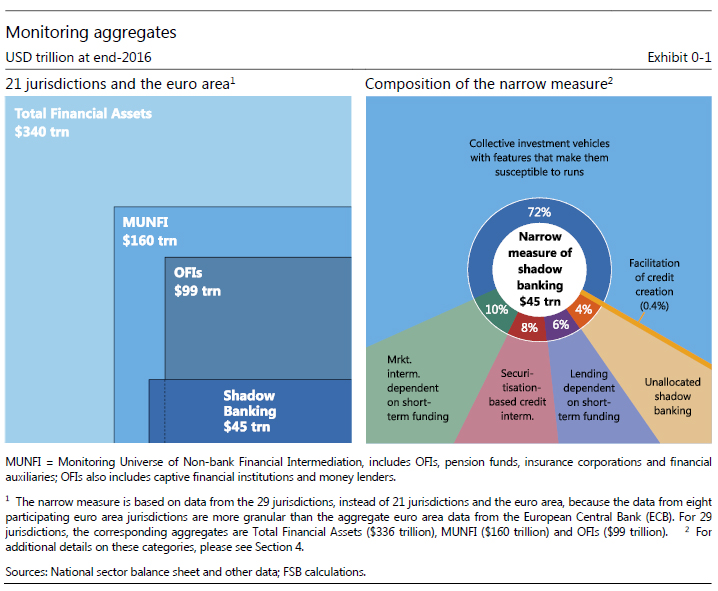 As part of the FSB’s strategy to address financial stability risks from shadow banking and transform it into resilient market-based finance, the FSB has been conducting an annual system-wide monitoring to track developments.

The Executive Summary outlines key findings from the report while the Introduction provides background on how and why the annual monitoring exercise is conducted.

Section 2 presents an overview of all non-bank financial intermediation. It finds that, in 2016, total financial assets in jurisdictions participating in the monitoring exercise were $336 trillion, of which non-bank financial entities comprising “Other Financial Intermediaries” (OFIs) were $99 trillion.

Section 3 sets out trends in the interconnectedness among the financial sectors. On an aggregated basis, both OFIs’ credit exposures to and funding from banks continued to decline in 2016 and are at 2003-06 levels.

Section 4 discusses the results of an activity-based “economic function” assessment in which authorities narrow the focus to those parts of the non-bank financial sector where financial stability risks may arise from shadow banking. It finds that: 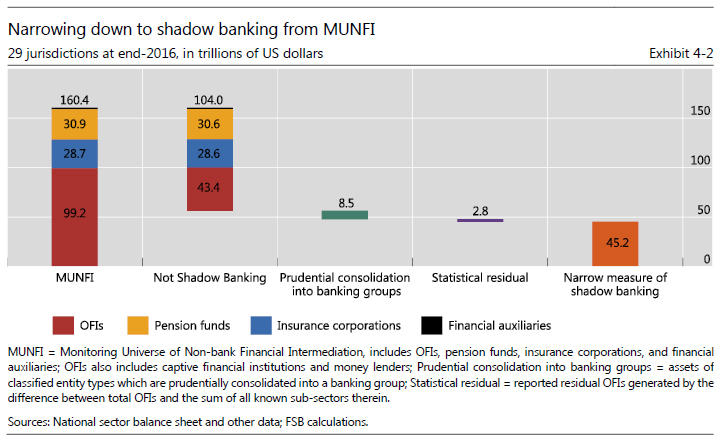 Section 5 sets out a detailed analysis of the narrow measure of shadow banking and the trends in the growth of the different economic functions. While levels of risks vary across entity types, the available data point to several broad trends:

The Report also contains several Boxes and collaborative Case Studies that highlight various aspects of non-bank financial entities and activities. For example, there are Boxes that discuss: captive financial institutions,  trust companies in China,  recent regulatory reforms related to money market funds, and granular analysis of interconnectedness among financial sectors in Brazil. The Case Studies were contributed by experts from participating authorities and examine: (i) the the non-bank credit cycle; (ii) corporate cash holdings as a demand factor for non-bank financial instruments;  (iii) developments and adaptations in housing finance markets; and (iv) loan funds in the European Union.