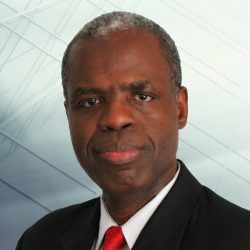 Co-Chair RCG for the Americas

Governor, Central Bank of The Bahamas

Mr. Rolle was appointed Governor of the Central Bank of The Bahamas in January, 2016.

For the three years previous, he served as the Financial Secretary in the Ministry of Finance. There, he spearheaded the implementation of the Government’s fiscal reform initiatives, which included the introduction of Valued Added Tax (VAT), strengthening of tax administration systems and enhancing expenditure control frameworks.

From 2009 to 2012, Mr. Rolle was seconded to the Executive Board of the International Monetary Fund (IMF) as a Senior Advisor to the Executive Director for Canada, Ireland and the Caribbean Constituency. In this role, he was a principal advisor on economic policy matters, supporting advocacy on behalf of Caribbean countries.

The Governor has returned to the starting point of his career in central banking. From 1990 to 2012, he was employed in various capacities at the Bank, progressing up the ranks of the Research Department.

The Governor has also contributed as an Adjunct Lecturer, in Economics, at the American University (2008) in Washington, DC, and, for many years, as a Part-Time Lecturer in Economics and Statistics at The College of The Bahamas.

Mr. Rolle has earned the right to use the Chartered Financial Analyst (CFA) designation. He holds graduate degrees in Economics from the American University in Washington, DC, and Carleton University in Ottawa, Canada. He was also an undergraduate of the University of Western Ontario in Canada and the now University of The Bahamas.

Mr. Rolle has published scholarly articles in a number of professional journals, and continues to pursue research on monetary, fiscal and exchange rate policies.